Inspired by a series of insightful talks at “Winning in the Engagement Economy”, this series of blog posts distils the key content from each presentation.

(Key content from the presentation by Johanna Fawcett, Marketing Director of Zizzi and Group Digital Director of Azzurri Group)

Looking back on the years before the millennium, the high street and the dining experience most of us were offered looked a lot different. Typically just a few establishments offered a limited range of foods and dining experiences: three or four pubs and a takeaway was the standard small-town high street offering. Tables could be booked over the phone, food was unimaginative and unadventurous so from establishment to establishment, and from day to day, it was often similar.

There was no TripAdvisor or social media. If you got great service or great food, or if the place was terrible, you just told people you knew. Unless you were a reviewer – in which case, you were unlikely to be spending your Saturday lunchtime in the Nag’s Head – that was about all you could do.

Granted, in some places the situation was more extreme than others. The US had more vibrant cuisine, in its larger cities at least, before the UK and Australia. And big cities tended to get Thai, Indian or Italian restaurants before small provincial towns and villages. But the picture’s still pretty fair.

Fast forward twenty years: the dining scene is unrecognisable. Today’s consumers would recoil in horror from a menu that was basically mince and mash, served two different ways. The modern consumer expects to be able to call up food from all over the world: Thai, Fillipino, Greek, Italian, Spanish, Moroccan.

Consumers have more options than ever

It’s delivered for a tiny charge or for free to wherever you happen to be. Usually you can pay without using cash. If you have comments to make, TripAdvisor, Twitter, Facebook, Instagram and a host of other channels and platforms await. 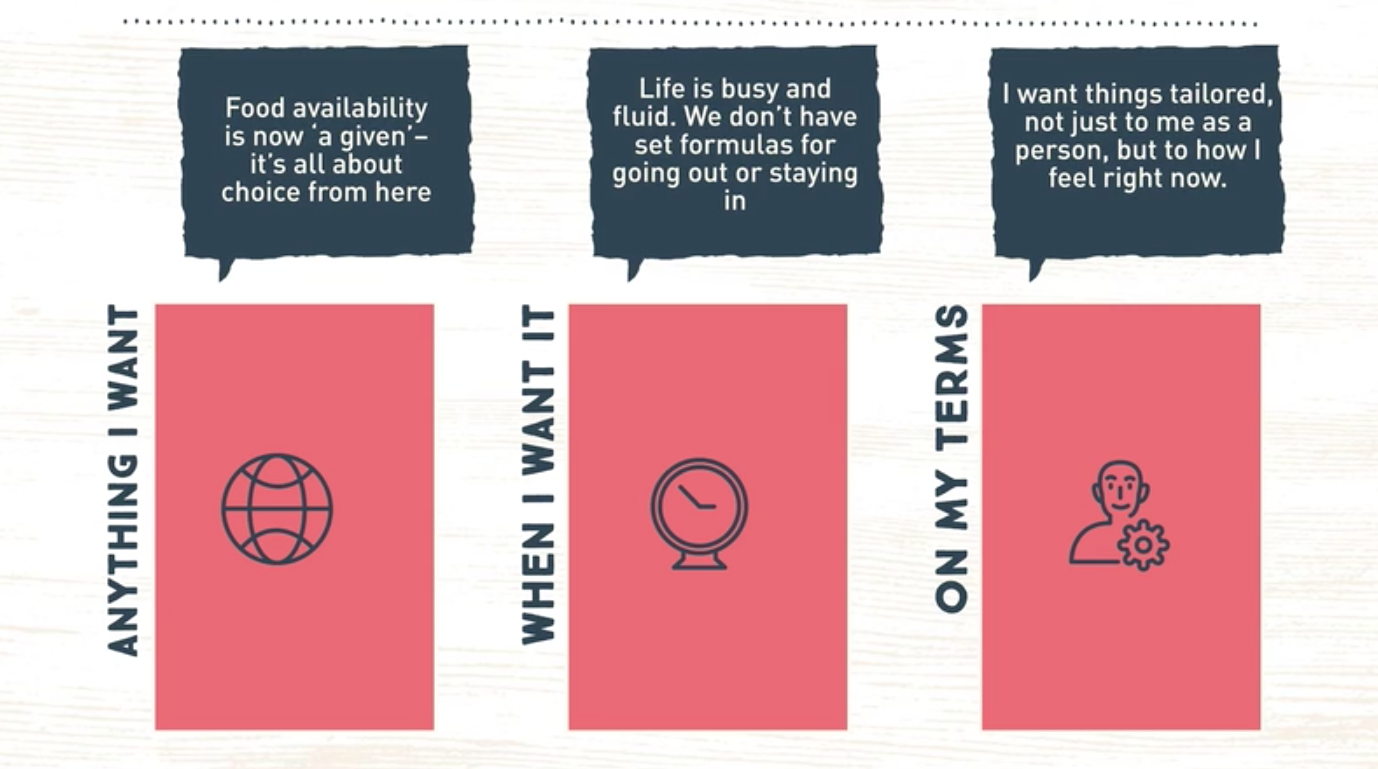 In short, the modern consumer holds the reins, in a world in which casual dining is more imaginative and varied than fine dining was two decades ago.

Naturally, for dining businesses, this presents a problem: how to stand out? And how to attract and retain customers who want novelty and choice?

Standing out in crowded, low-frequency spaces

Zizzi faces these challenges. In the casual dining space, brands struggle with what Zizzi marketing director and Azzuri Group digital director Johanna Fawcett calls, ‘an incredibly low frequency of visit – about three times a year.’ Mainly that’s because people want variety and novelty, and they don’t want to go to the same restaurant or eat the same cuisine all the time. So in that kind of marketplace, Zizzi can aspire to be people’s Italian casual restaurant of choice – but they can’t hope to see most customers once a week. 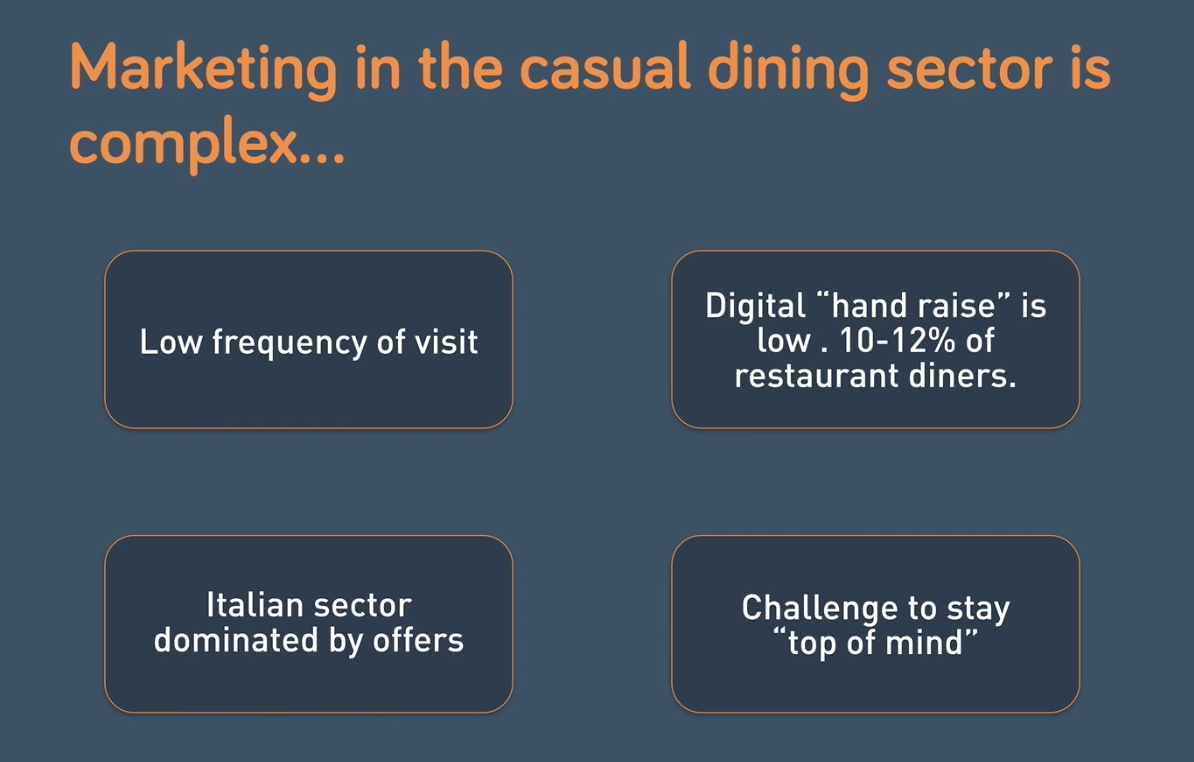 This visitor frequency issue makes many of today’s go-to brand engagement strategies inapplicable. Mobile apps, for instance, are less likely to be effective for a brand like Zizzi. With the number of apps available and limited space on phones, memory is at a premium: an app that’s relevant only once every four months is first up for deletion and could see low engagement.

Another method in common use is discounts, often weighted toward less busy days. In the restaurant business, Friday and Saturday are the nights when an establishment makes its money, so typically far higher discounts are offered for Monday and Tuesday than for Saturday.

‘Part of my job is to try and manage the discounts effectively,’ says Johanna Fawcett, ‘and I try to do that by being a bit more interesting.’ The challenge of effective creative remains, even when you’re offering 25% off.

Finally, attribution isn’t so easy. Zizzi is consciously casual – no need to book a table, and no need to digitally engage. Without old-fashioned reservations books or digital hand-raises tracking audience behaviour and responses to campaigns can be very difficult. Zizzi gets around 200,000 visitors a week; Johanna Fawcett says, ‘I have some kind of digital proof of about 10% to 12% of them so they’re the only ones I can go back and remarket to in the digital arena.’

Much of the efficacy of modern marketing is hard to access, for the Zizzi team and many others in similar spaces. How can they gain better customer understanding and engagement so they can leverage digital marketing with more than a tenth of their customer base?

The most immediate challenge is to arrange to be top of mind in the moment when the consumer is selecting from similar options. If someone fancies Malay food tonight, Zizzi isn’t in the running; but if a customer is considering an Italian meal, Zizzi wants to step in at that moment and encourage the customer to make Zizzi their Italian venue of choice. With a narrow digital base and transient, low-visit frequency customer base, how does Zizzi achieve this? 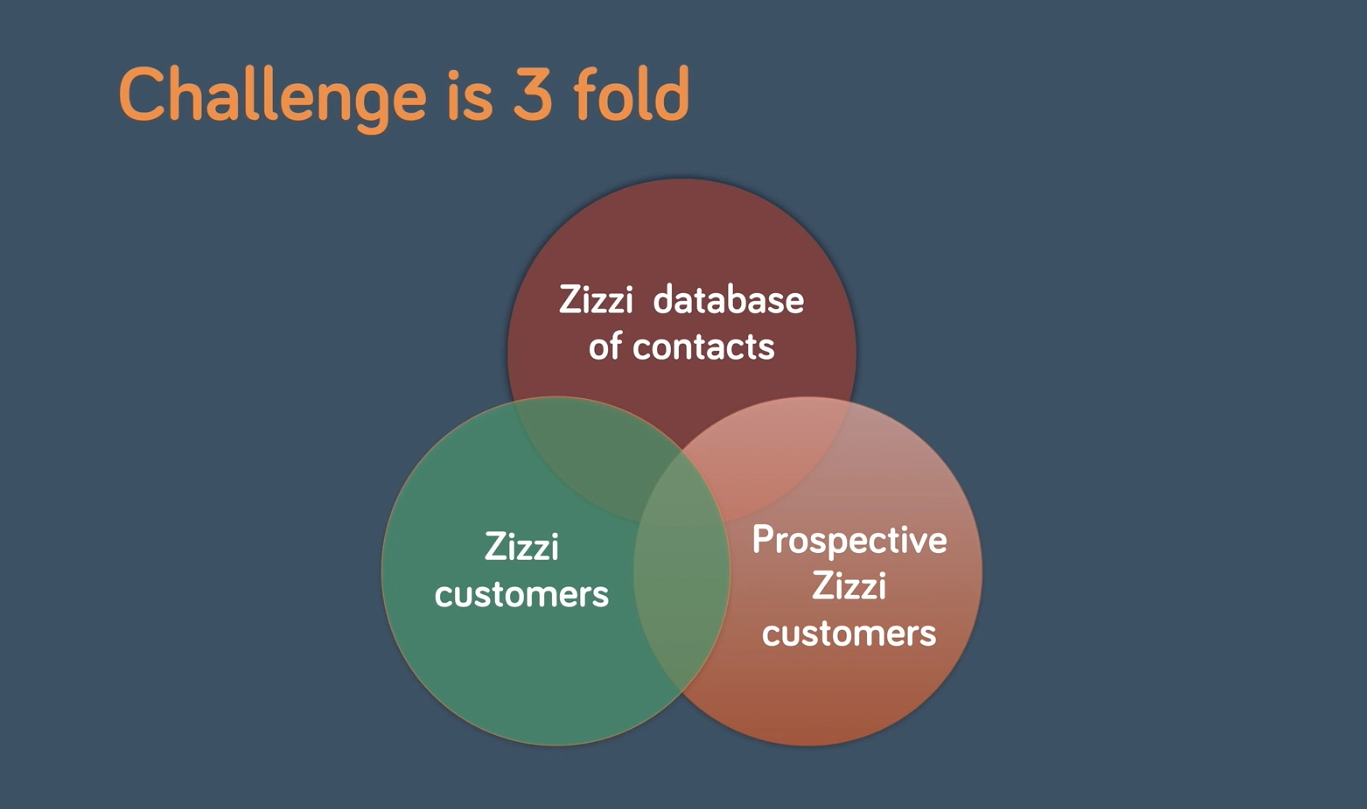 1: While Zizzi has a database of over 2 million contacts. How can more of those contacts be persuaded to become visitors in a year.

2: How does Zizzi encourage those visitors to take part in some kind of digital hand raise so that their visits can be tracked and they can be remarketed to? Ideally this should involve information about dining preferences so that that future remarketing is targeted. For instance, addressing one of the growing number of vegan Zizzi customers with an email advertising a pulled-pork Rustica isn’t going to generate more custom.

3: How does Zizzi reach out to consumers who are planning to visit a rival restaurant and convince them to visit Zizzi instead? This is of the most interest to marketing managers in many cases, but it’s not always the most vital metric long term. Engagement may be more important.

Broadcast emails can’t hope to address this issue, because they inevitably miss the moment too often. Messages need to reach consumers while they’re actually in the moment of purchase or consideration, but without deep customer insights they’ll tend to arrive outside that moment and simply be ignored or deleted. This is how you end up in spam folders or getting deleted. How do marketers in this situation move away from their 12% open rate email blasts and reach out to customers in the moment?

The other challenge, of course, is the opposite: to create content so interesting to our customers that they open it even when they’re not thinking about visiting a restaurant.

Zizzi came to 3radical, drawn by the idea that gamification could deliver engagement in the long term, earn customer information that could be used for targeting and match the fun, engaging brand image that Zizzi has.

In September 2015, Zizzi and 3radical got together and built out a group of digital experiences that worked across multiple platforms  –  a major issue for Zizzi, these made it possible to build multiple entry points to the experience. Zizzi used point of sale, social and email to let their customers know about the opportunity.

Configured a little like a sweepstake, a game was created in partnership with the brand’s chosen charity, Cancer Research UK, and some professional rugby players to create ‘Zizzi Tackles Cancer.’ 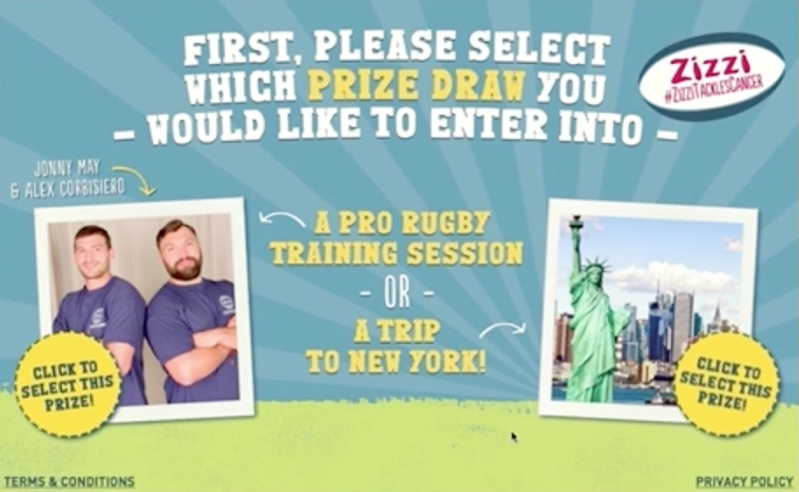 Users signed up to play, scoring data capture for Zizzi which was a major stumbling block before. This data included basic contact info and one more, vital point: were they in restaurant or out of restaurant?

That matters because Zizzi wanted to know what percentage of unique players were coming from the different channels. 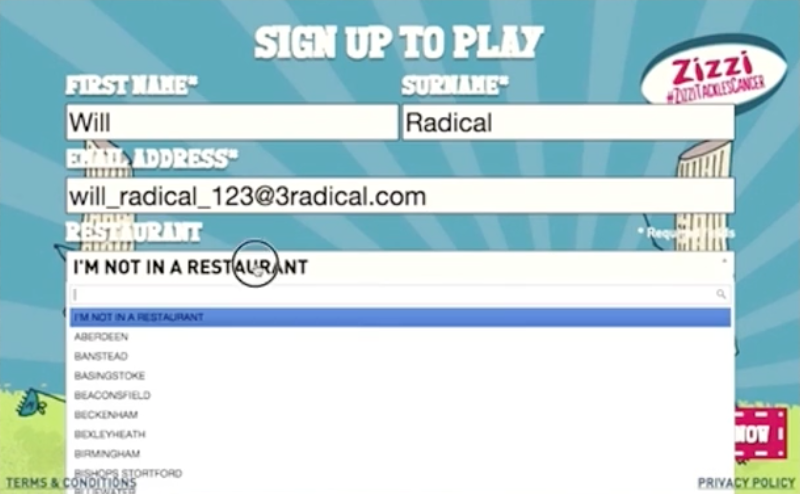 A single entry gave a users a single chance to win. Users played by digitally ‘scratching away’ at a scratchcard: 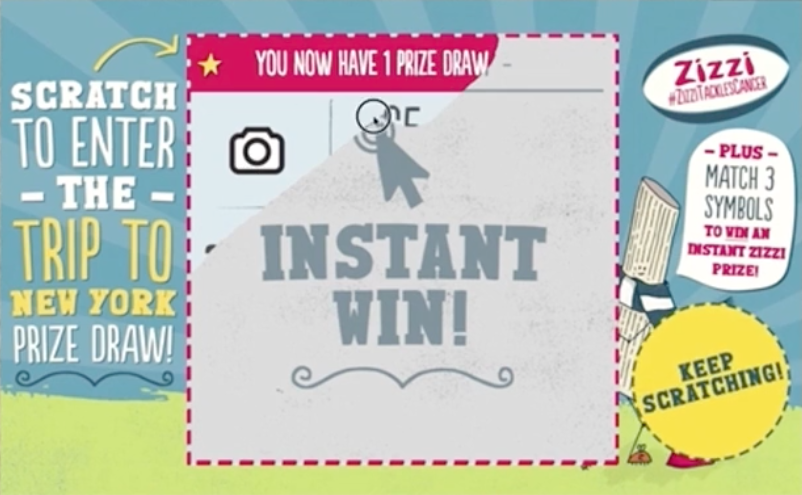 The prize was a holiday in New York or a professional rugby training session, with users able to select (the New York trip was more popular, which Johanna Fawcett ascribes to the fact that ‘most of our audience is female… or at least, it’s the female who makes the decision.’)

Zizzi picked up 90,000 unique players for the game, 20,000 new acquisitions, including some pretty impressive social shares. ‘We haven’t currently got a game in play,’ saya Johanna Fawcett, and I’m already seeing the decline in our web traffic.’

Zizzi was fascinated by the kinds of activities people would do to get another shot at winning, including donating to Cancer Research UK, as well as sharing on Facebook and Twitter. 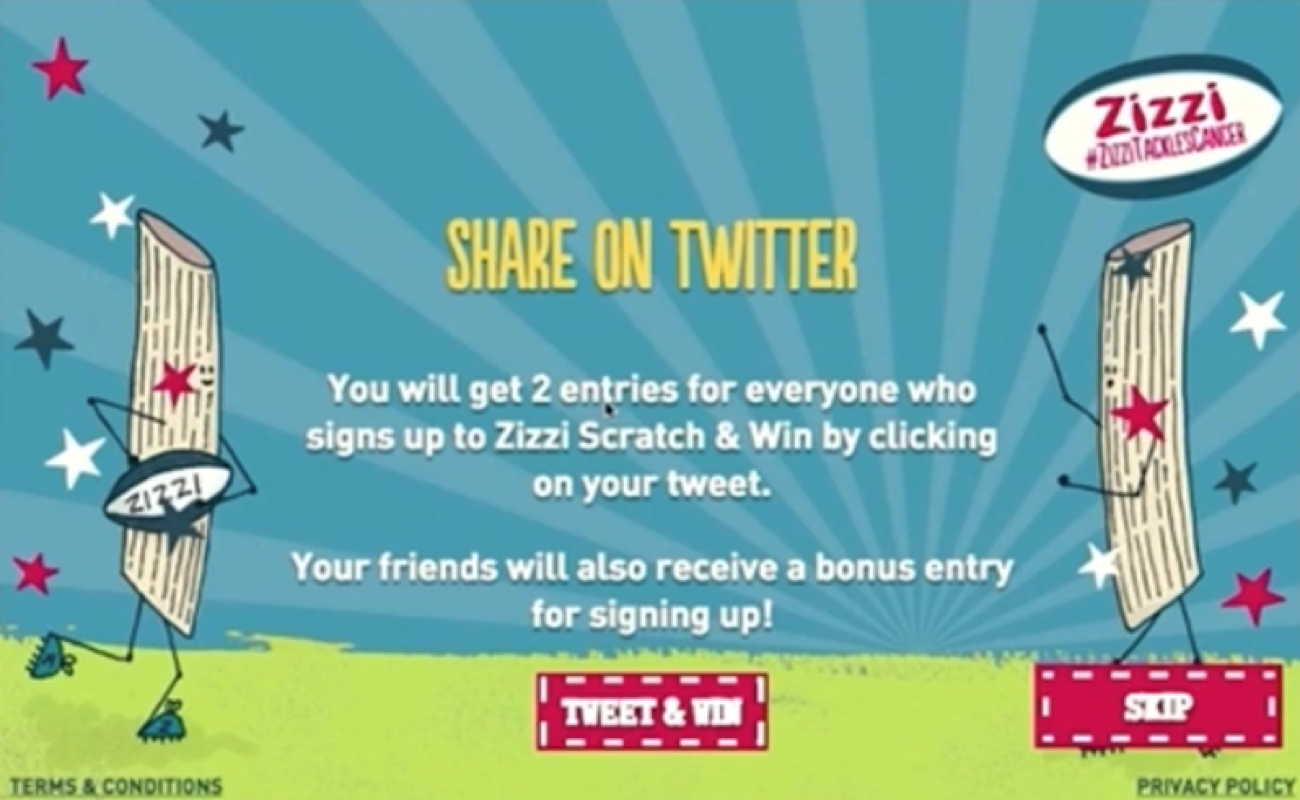 After the success of the ‘Zizzi Tackles cancer’ scratchcard game, Zizzi and 3radical took things a stage further with a board game, January Smiles. Again, the game generated a lot of engagement, and 33% of players played on five consecutive days; website analytics data showed these users visiting to play, but then also browsing other pages, indicating an enviable depth of brand engagement. 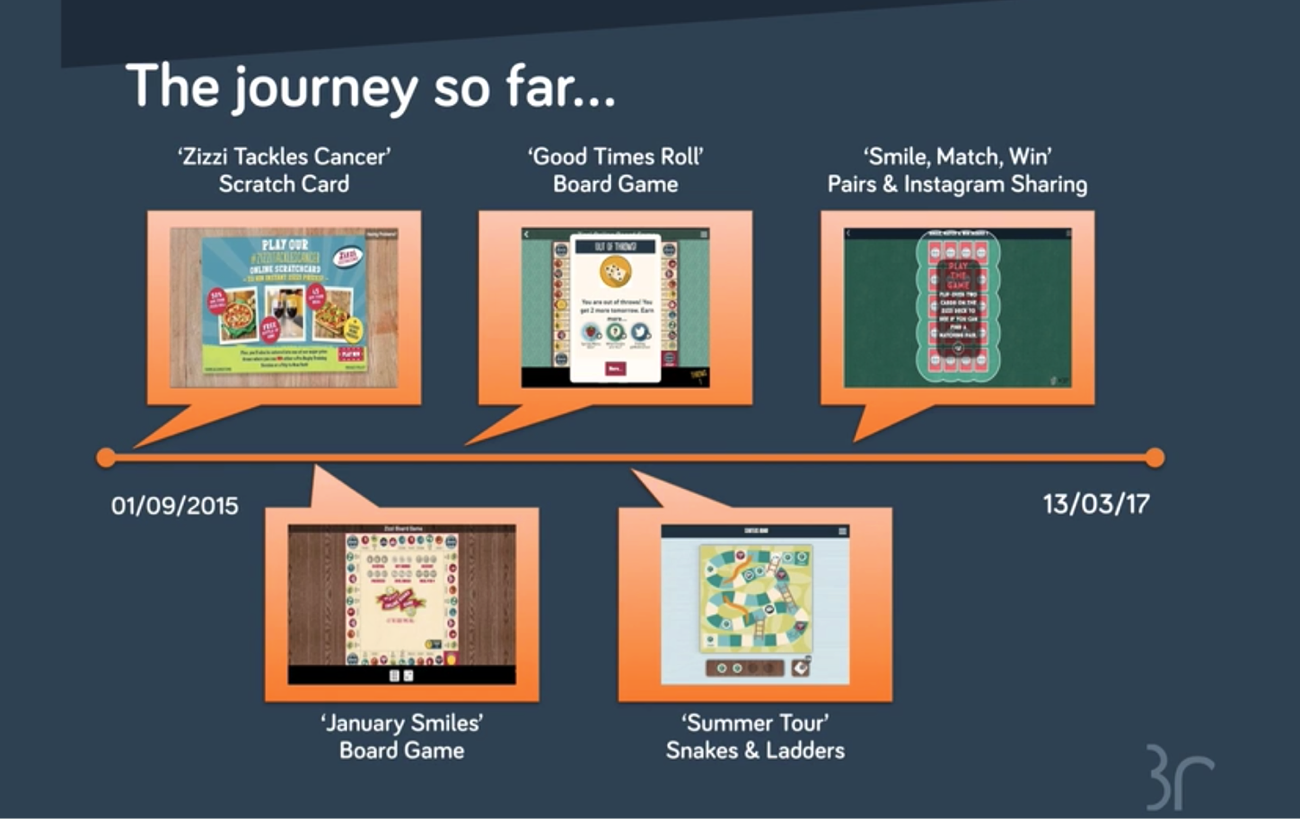 The next iteration was in summer, a Snakes and Ladders derivative called ‘Summer Tour.’ Zizzi was interested to see how much insight into customers could be generated by the engagement they got from their games: could they use the games to find out tricky, yet vital data like dining preferences? In fact, 27,000 users were willing to fill in questionnaires saying whether or not they were vegan, and providing a host of other important information, to get up a ladder in the game. That’s solid data that Zizzi can use in later marketing efforts to sharpen and personalise messaging.

The next step: iterating based on data 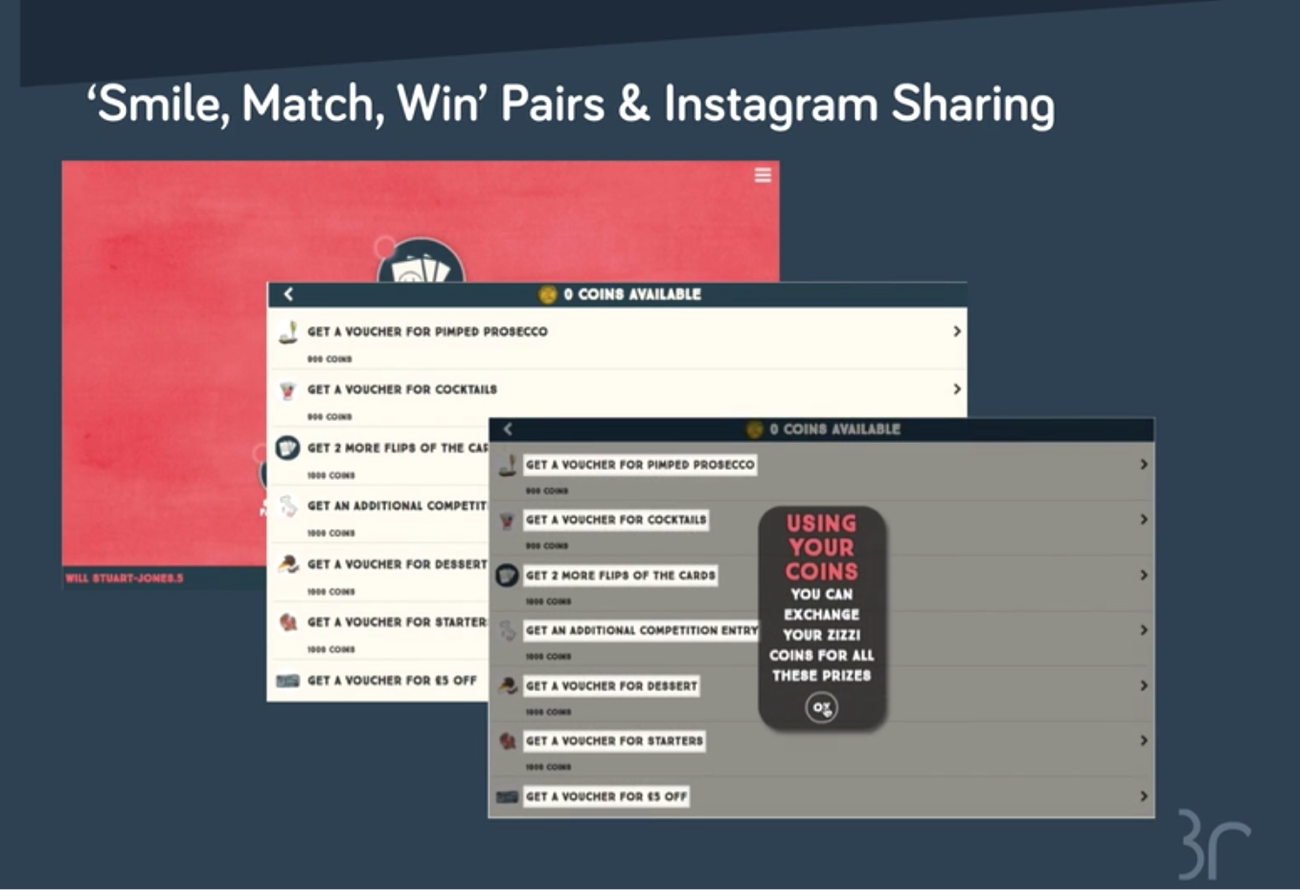 Here, they used the 3radical platform just as they had in their previous games. They chose to use more features of 3radical Voco – the email verification, Instagram sharing and following and ‘Zizzi coins’ as the reward mechanism.

The in-game currency – Zizzi coins – let consumers save up and then choose their own offer. This self-personalisation was highly effective – not everyone wants a free bottle of wine, some people are highly motivated by a 10% discount on the bill while others wouldn’t respond to that offer.

So letting their customers choose their own offers did two things: It vastly widened the scope of the game’s appeal, and it let Zizzi collect information on their customers’ preferences while serving them. Email validation was crucial too – many people either use fake emails or zombie email addresses that they never use, hurting deliverability scores and ability to reach customers.

How successful was this highly-tailored campaign?

Zizzi saw three times as many clickthroughs as usual, so the results were good. But at the same time, Zizzi recognized the need to move beyond that, targeting ‘always-on’ gamification, solid customer knowledge of a baseline of 30% of visitors and a situation where the vast majority of consumers can be contacted digitally. 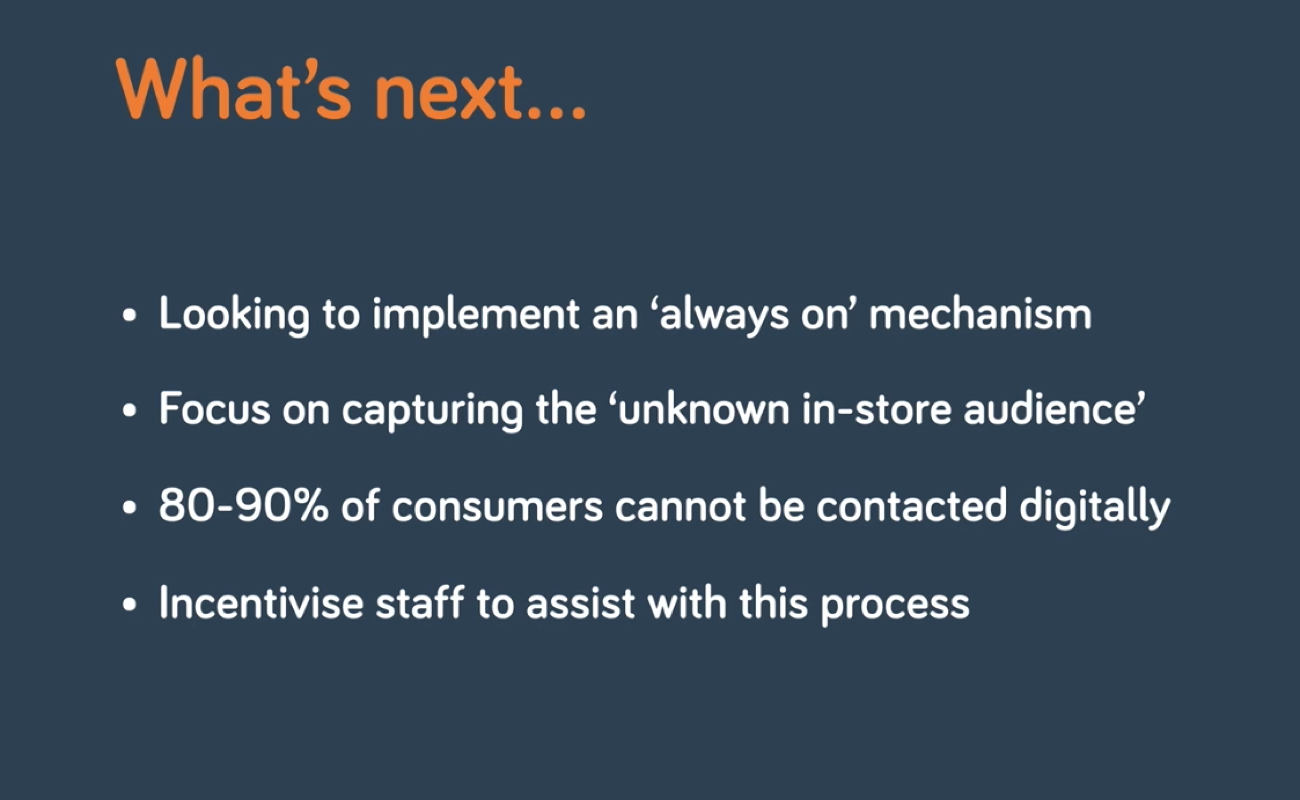 Zizzi has 3,500 staff – how could the brand involve staff in their engagement efforts?

The solution they opted for was a spin-the-wheel digital game, offered at point of sale in restaurants via mobile. Staff are incentivized for the number of people they sign up, and consumers are incentivised to play. 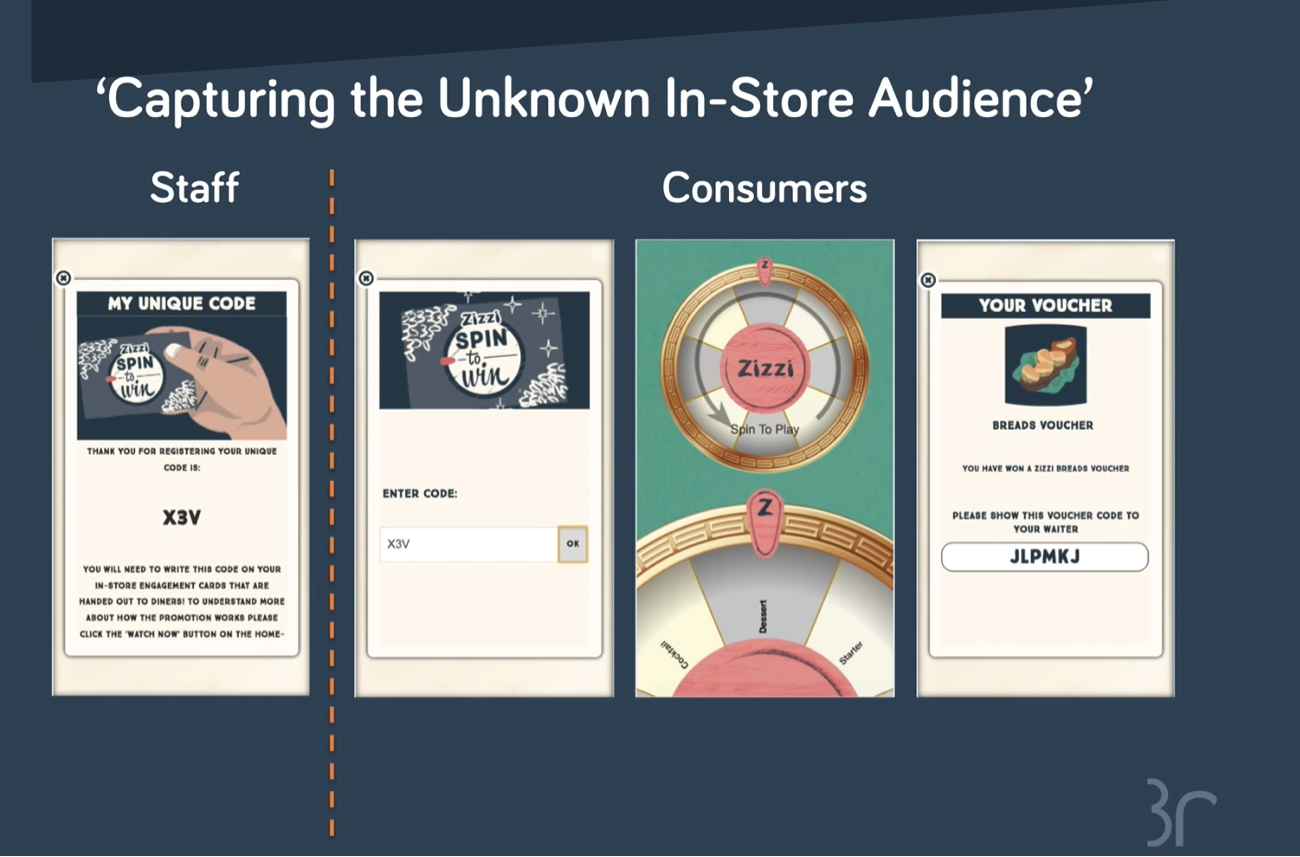 Making the gamification both simple and rewarding for staff was crucial – on a busy Saturday night, as Johanna Fawcett points out, ‘if you make it difficult for your waiters, they are not going to do it.’ 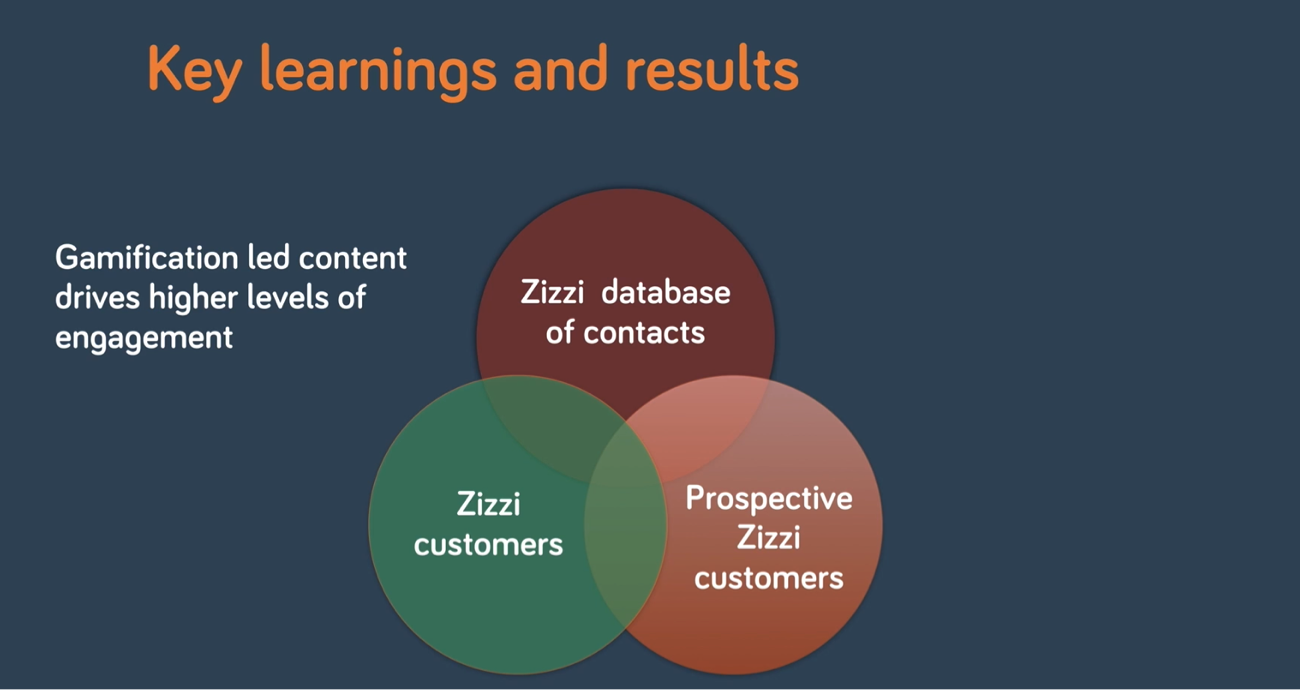 A six-week trial on numerous sites resulted in about 15% of customers signing up – more than doubling the known audience.

We are delighted to be working with a fantastic brand like Zizzi and the innovative team led by Jo Fawcett, to drive digital engagement forward in this rapidly changing industry.

CHECK OUT THESE USE CASES