Inspired by a series of insightful talks at “Winning in the Engagement Economy”, this series of blog posts distils the key content from each presentation.

(Key content from the presentation by Mike Talbot, Chief Visionary of 3radical)

Right now, many businesses have a marketing tech stack – usually now a marketing cloud. It does everything you need to deliver content and ads to customers everywhere. These drive incredible efficiency and reach, but in many cases are effectively pipes, designed to pump content out at customers across digital channels. The actual content being so distributed is often flat “broadcast” messaging, and not relevant to the individual in the moment they receive it. The delivery system is 2017; the content itself more 2007. 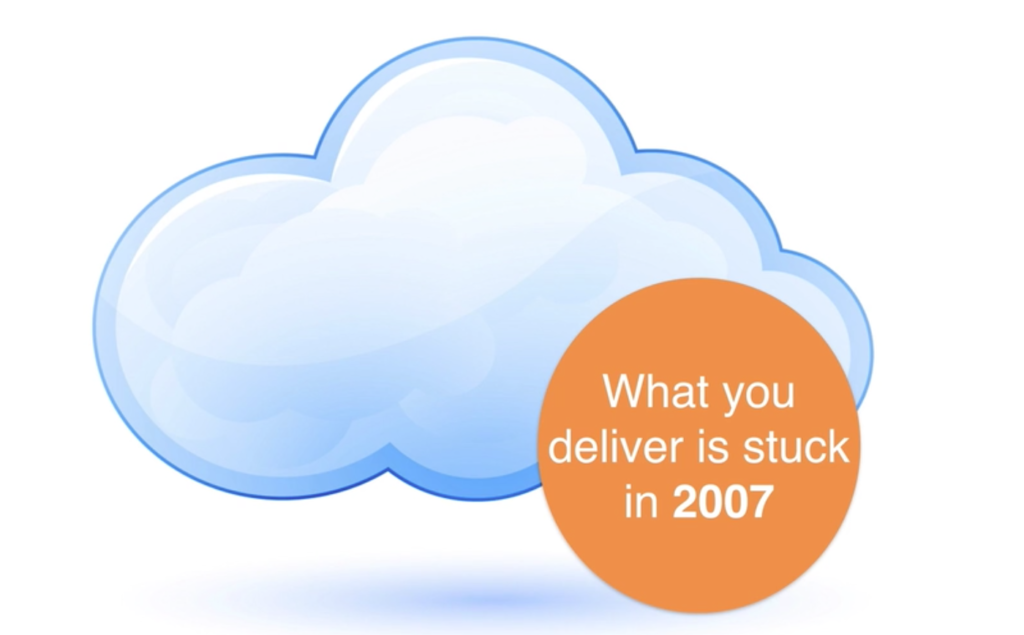 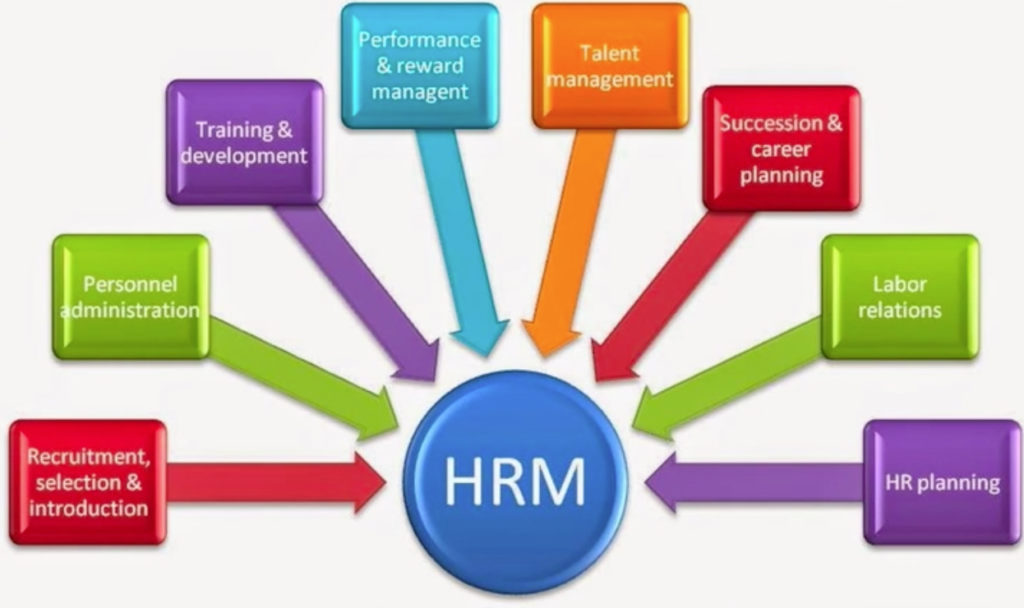 When did this look new and fresh?

The engagement tech stack and the modern individual

Using a system to push out emails to employees gives you two basic categories: older people who ignore your emails, and younger ones who ignore email as a channel altogether.

Millennials don’t use email for very much, any more than they expect to use a fax. The only place they use email is for work, because… well, because HRMs make them.

That’s a big problem for marketers too: often emails are contextually irrelevant, especially for younger shoppers.

And the material you can deliver that’s contextually relevant, the great messaging and carefully calibrated smart marketing system, makes a difference to relatively few people – those who endure the journey from search and into your system.

So where are our customers and employees?

Everyone keeps their mobile within reach day and night. Our employees and our audiences are in the same place: checking their messages on Messenger, WhatsApp, Instagram. Creating an app for phones gets you closer to the customer’s device. But the customer is actually already using another app. They already have a native environment, and it’s messaging and social; they likely won’t make the switch to your app unless you’re so huge that they can message and socialize within it.

3radical and the customer-centric journey

We know that customer journeys aren’t linear. The nice, clear diagrams that tell us what our customers will do never come true in real life.

But even though this plate of spaghetti attempts to depict the reality of the customer journey, there’s something wrong with it too.

No image can depict the immense complexity of customer journeys and build a line or funnel that matches it.

Instead, 3radical moves away from the idea of funnels and mappable journeys altogether.

‘Let’s be wherever we can be with something to support the progress towards a transaction anywhere where the customer might touch something rather than trying to force people down a particular journey.’

Whether that’s a wifi portal signup, a physical event, or your friends sent you a WhatsApp or Messenger message about it – all of these are potential entry points into a platform. They’re all ways to get people to interact.

Once you’ve got people to interact, though, you need to give them something to do. Something that’s beautiful, interesting and a bit different.

The odds of someone who gets an email from you being in the mood to buy a pizza at that moment are very low. So even people who open and read the email often won’t redeem your offer: open rates are way higher than click-through rates and this is a large part of the reason why. You have a 30-second window on one day to match your 30% off a pizza with a customer’s desire to buy a pizza. Probably those two things will actually miss each other.

On the other hand, if your customer comes and interacts for multiple minutes at a time, multiple times per day for ten days, you’re much more likely to be interacting with someone who wants to buy a pizza – especially if they’ve been playing one of Zizzi’s games all that time and being reminded how much they like Italian food,

This is the type of journey 3radical supports: we allow journeys to be emergent, amorphous and shaped by customers.

We base our approach not on a funnel but on seven key principles. 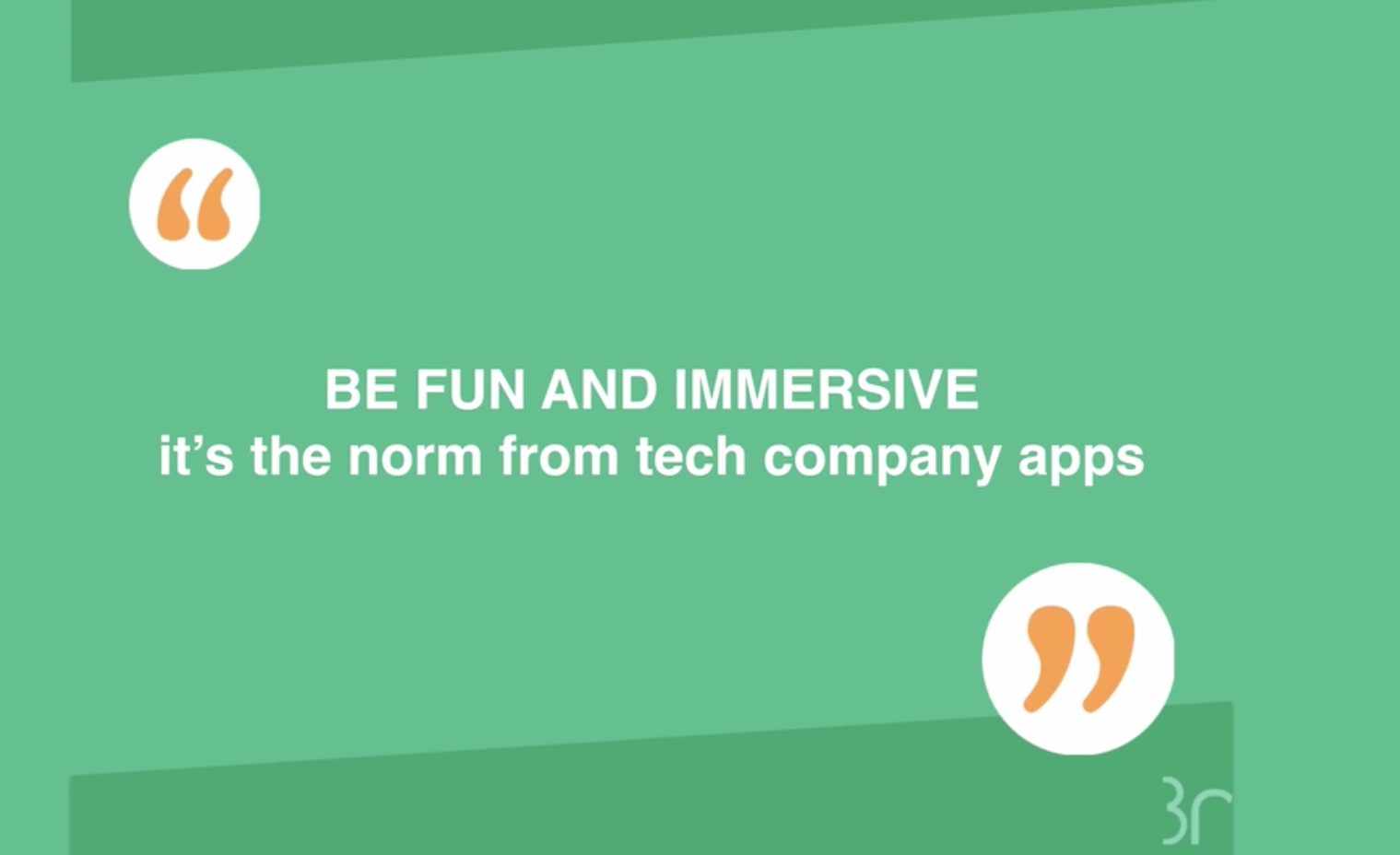 Fun, immersive experiences are the norm for consumer-facing tech. Consumers and business buyers increasingly expect this from everyone. Make sure they get it from you. 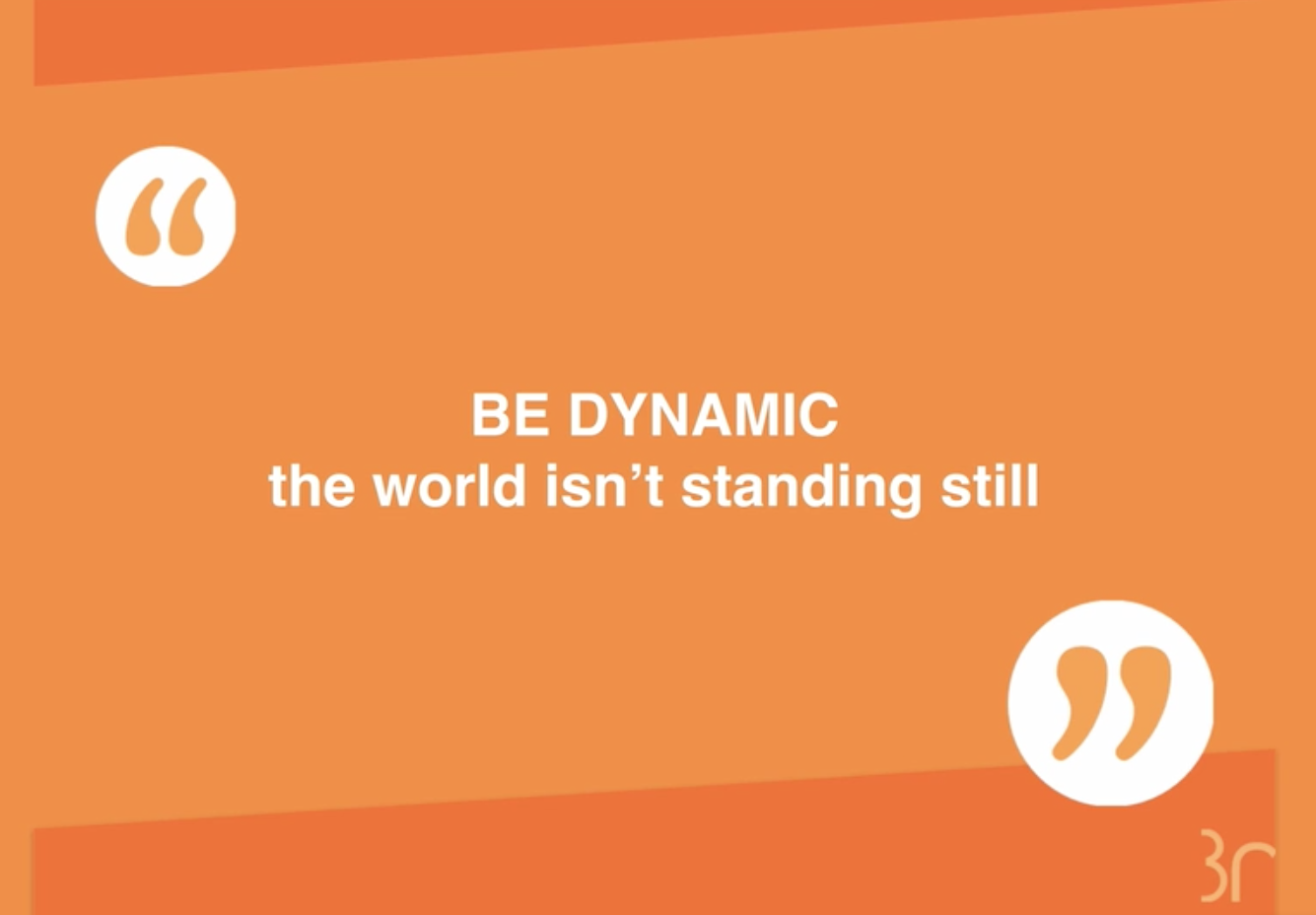 We see a lot of this. ‘We spent $500k building an app – it worked great for about six months, then no-one used it anymore.’ Your presence has to be dynamic. It has to be able to change at the speed of thinking, not of backend development. That will always be too slow.

The only companies that can get away with moving at that pace are the ones that own the infrastructure of the digital consumer and business world – Facebook, Instagram, Google. And even they are feeling the tailwind. If you don’t have armies of developers and millions of dollars, you need another approach. 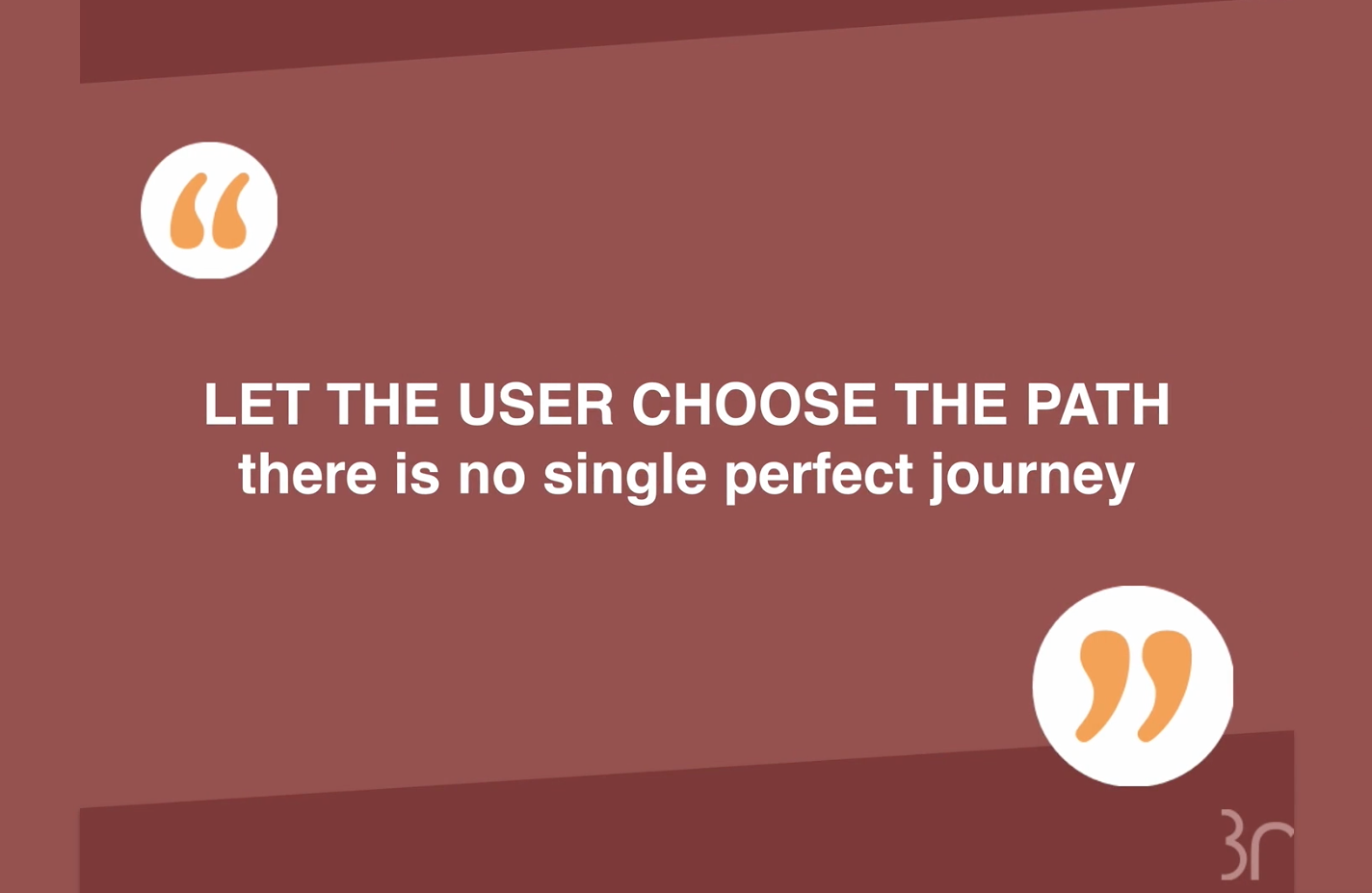 The user is in charge. Your approach has to reflect this. You can’t herd people down a funnel or keep them on-piste in some increasingly complicated map of the buyer journey(s). Follow the customer, be where they are and where they’re going to be.

Now, here’s the really key thing, the idea everything we do is built around: 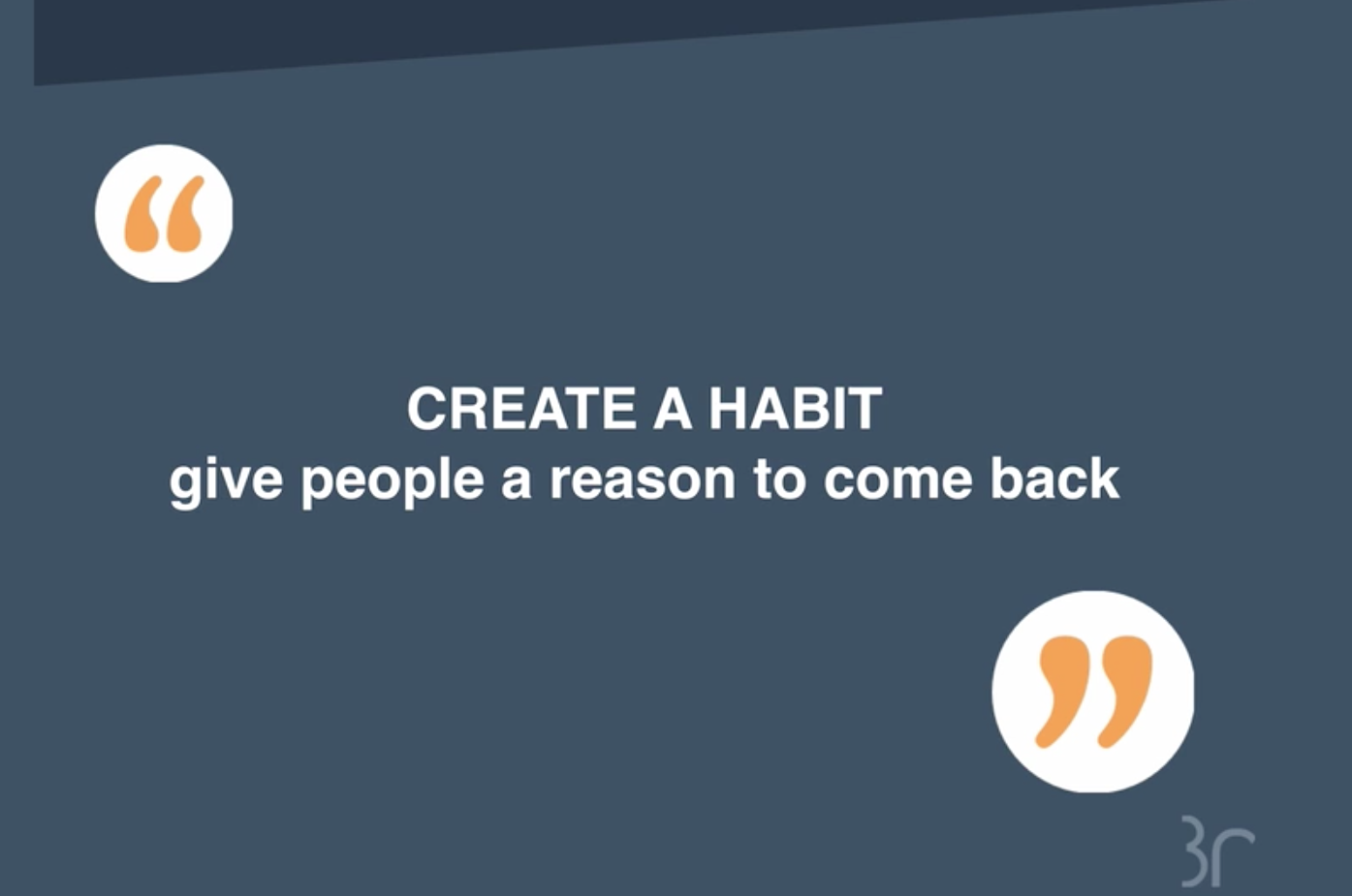 Give people a reason to interact with you, and to initiate the next interaction themselves. Teach them to want to spend time with your brand. If you can create a habit and encourage them to back again and again, they’re that much more likely to do what you want.

You can find perhaps the top 10% of customers by engagement, and these enthusiastic advocates can then be used to grow the network of contacts and effects organically. 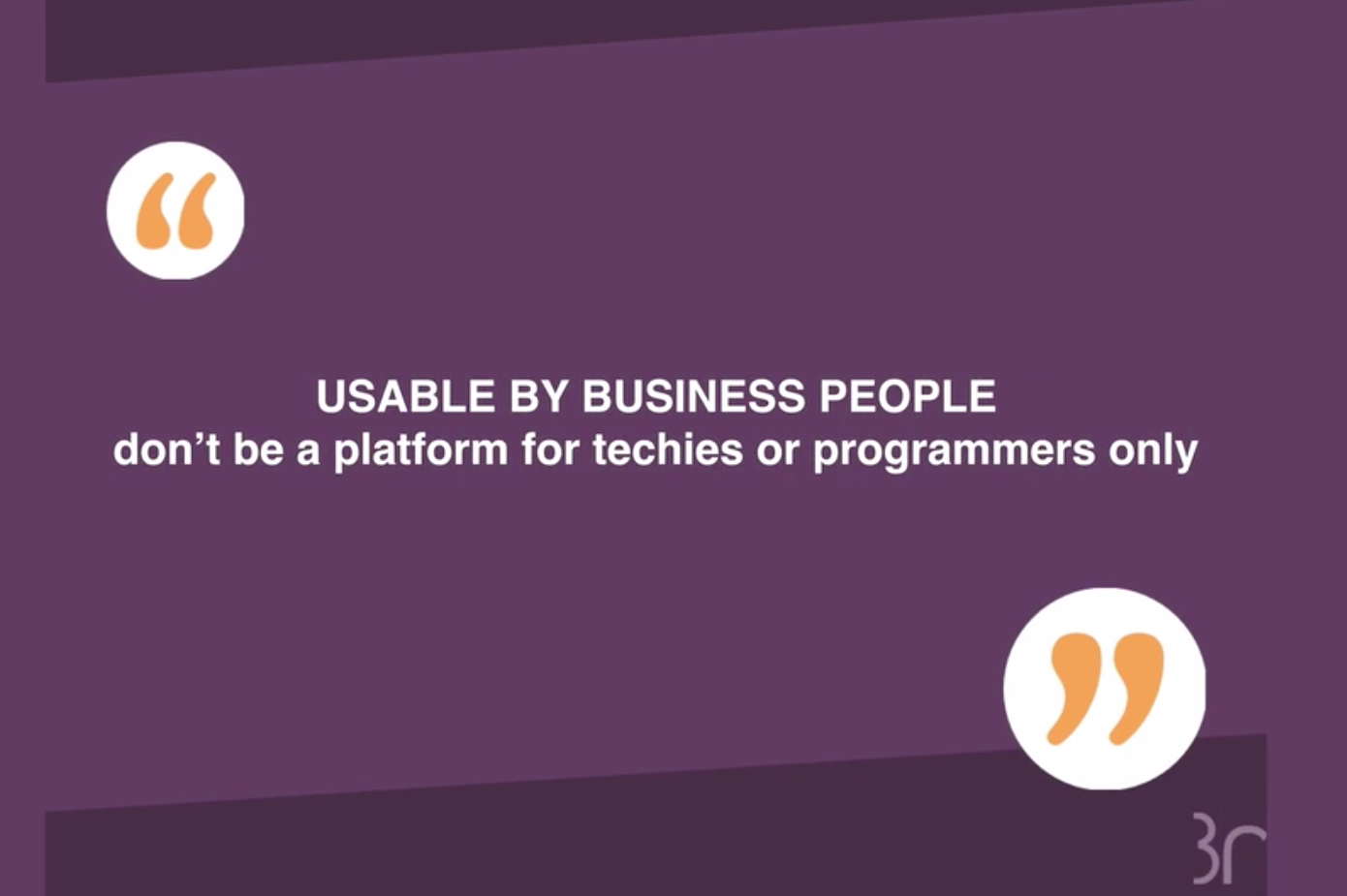 Be something that anyone in a business can pick up and use. Take the cues from consumer facing tech, which is where everyone increasingly derives their expectations of all interfaces.

We have form with this: working with Zizzi, we were approached by Coca-Cola who asked us to put a Coke promotion into the ZiZi promotion. 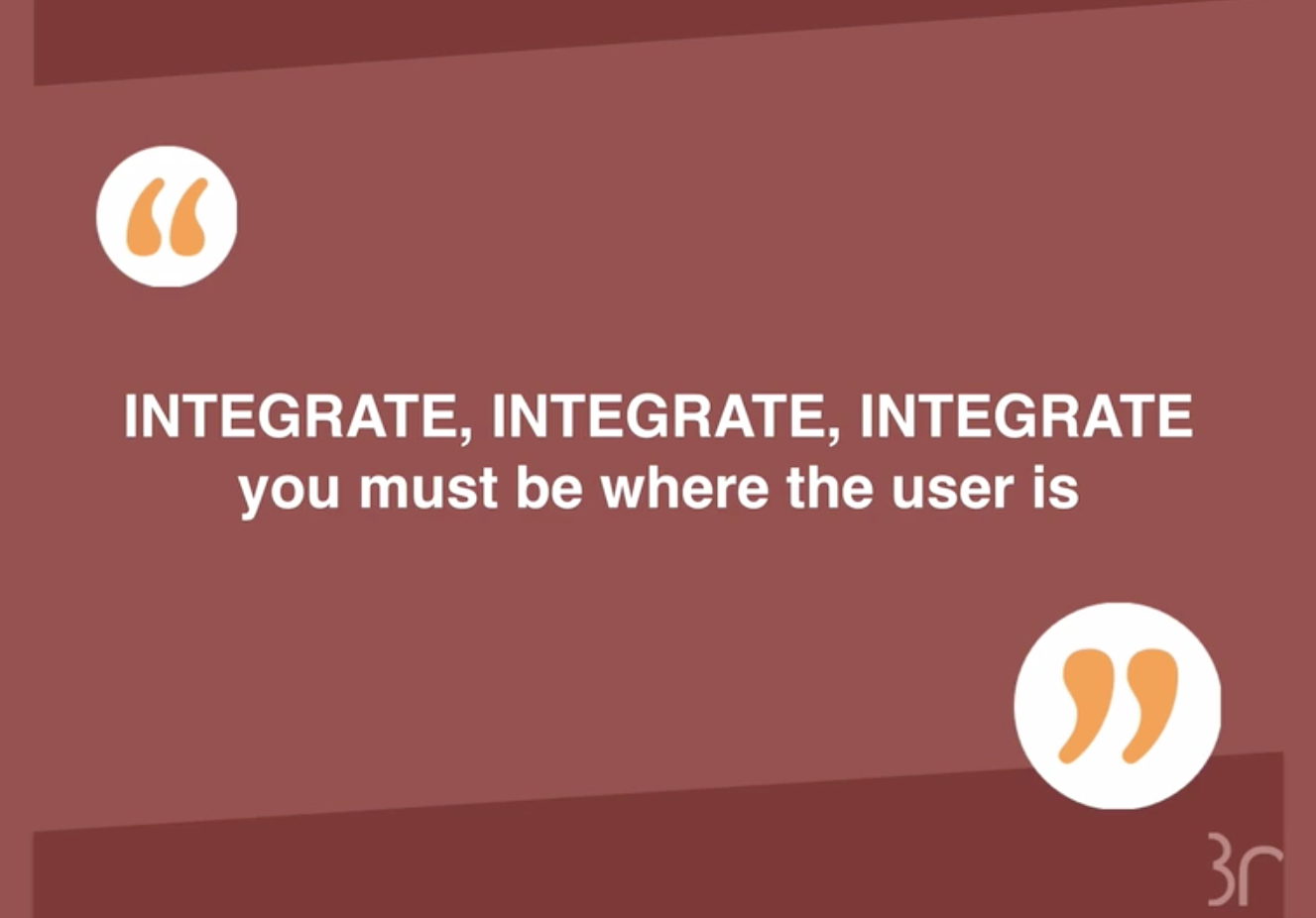 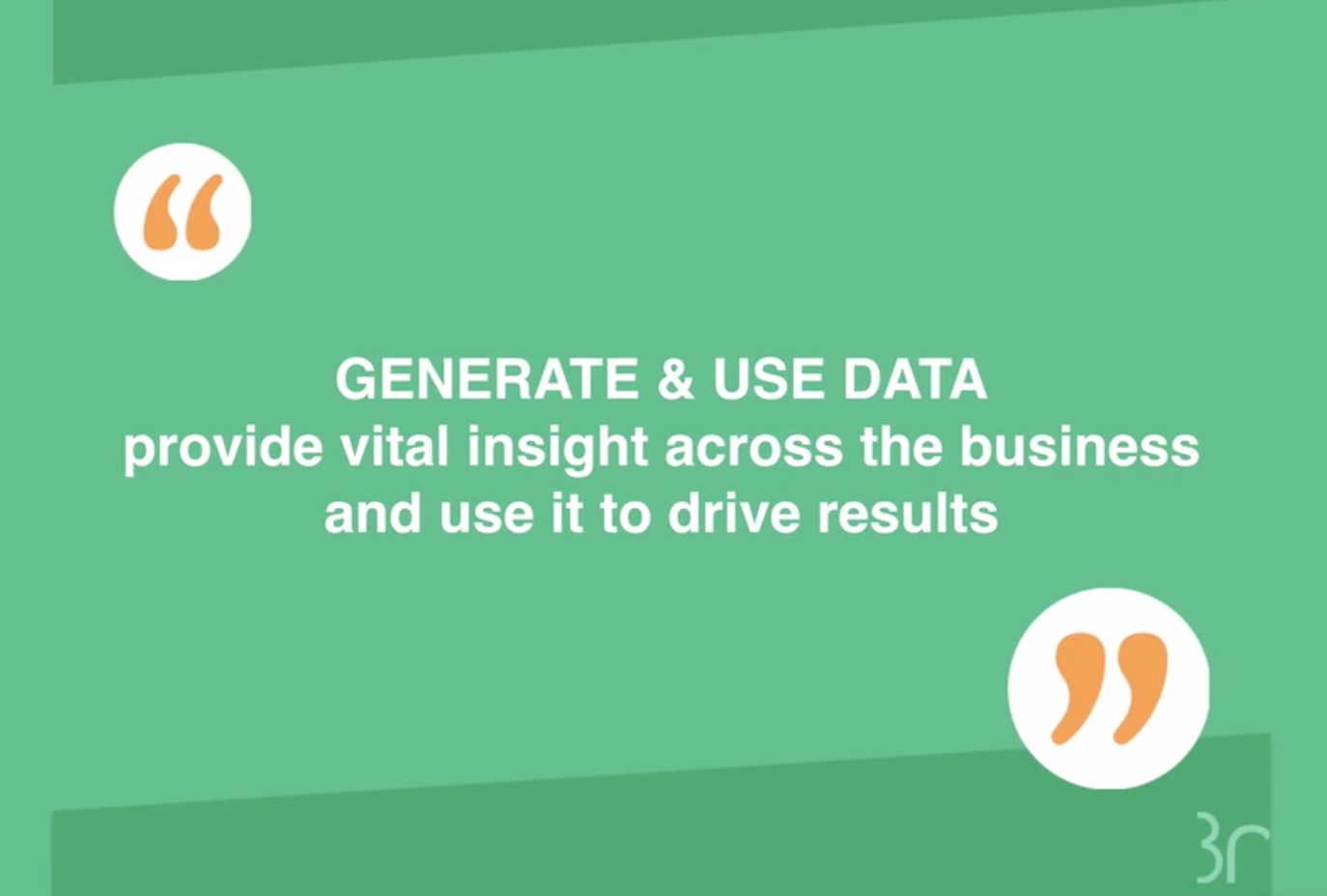 We need to be generating data based on our interactions with customers and employees, and using it to derive insights and drive decision-making across the business.

Under the hood: the stack itself

GTP takes inputs from everywhere that you might touch, it converts data into tokens and links them to outcomes.

Customers can buy three cups of coffee and get a fourth free, or get 30% off their pizza with seven game plays. But GTP lets you add an infinite number of token types in an infinite number of configurations. Users can be rewarded for nonpurchase behaviors with the same rewards as purchases, or different ones – up to you.

Rewards and relative values are all adjustable – all in your hands. 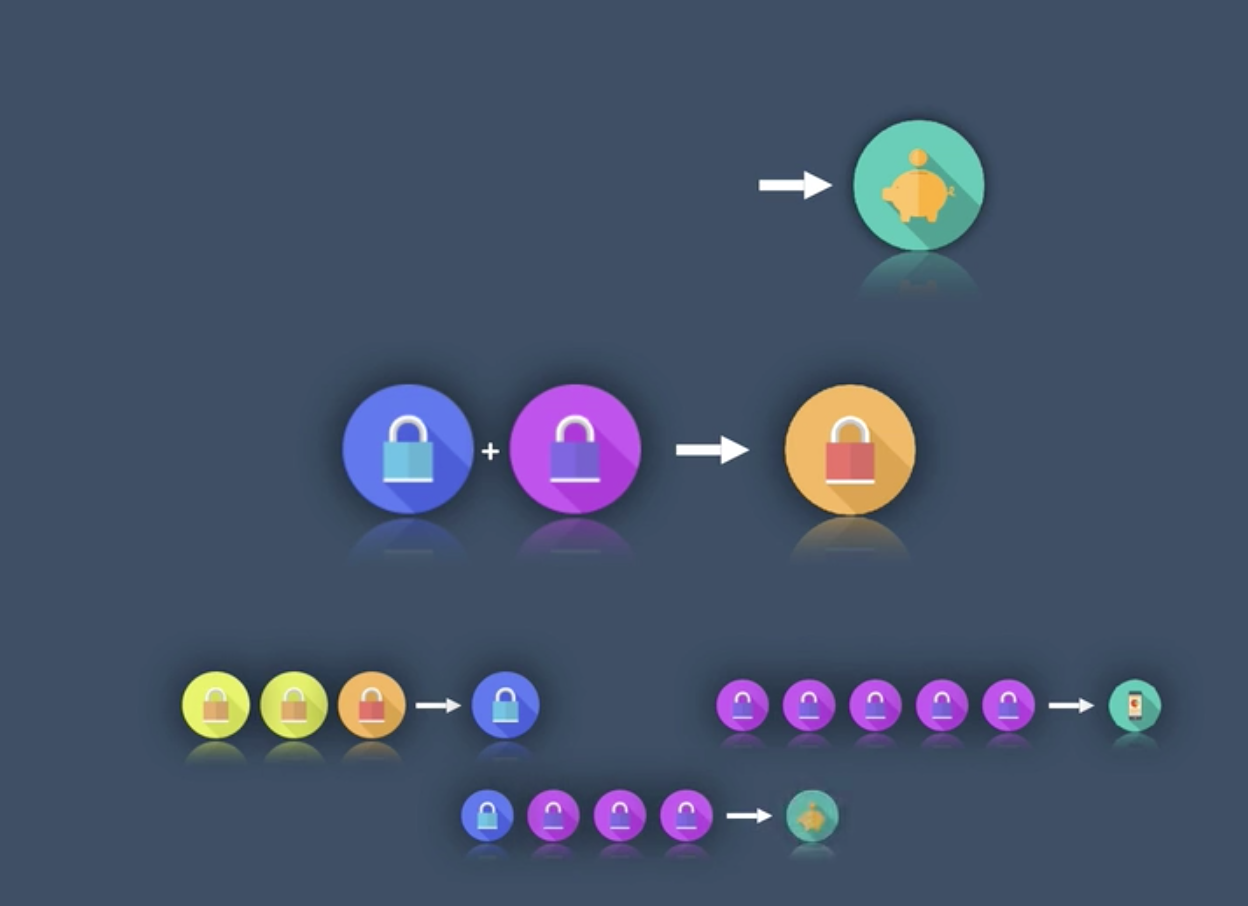 In action that lets brands create games like Zizzi’s board games: 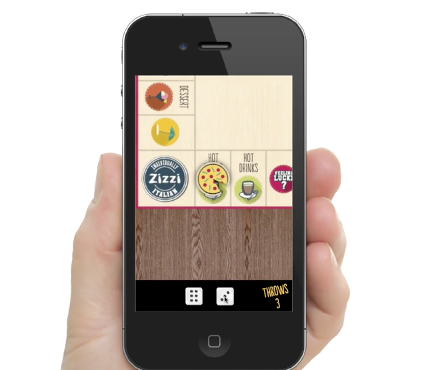 Board games like this are psychologically compelling because users tend to recall and mentally track how far they got and where on the board their token is – and how close they are to the amount of in-game currency needed for their desired prize.

One surprising piece of evidence for this was a feature of this game –  the meal for four tokens. Meal for four tokens could be sold out in the game, so players couldn’t purchase them. But we released new ones at midnight.

What did we see?

Massive spikes in engagement right around midnight. People were staying up to play the game when the tokens came out, to claim them before they could sell out again. These weren’t outliers – the numbers involved ran into the thousands.

It wasn’t a one-off either. When we created a game for electricity company Eon, ten thousand people played it – on Christmas day!

These are the marketing, consumer-focused elements of the platform. But what about business applications? How do we change the culture inside a business, encourage employee engagement and identification with the business’ values?

Onboarding is a requirement for new customers and new employees alike, but employee onboarding has traditionally been a joyless and ineffective affair, as everyone who’s ever been given a ring-binder full of HR-generated paperwork to ignore can attest.

How do we go about doing onboarding better, requiring some action from new employees and encouraging them to actually fulfill an onboarding journey, not just sit in an airless room while a stranger tells them how engaged they ought to be? 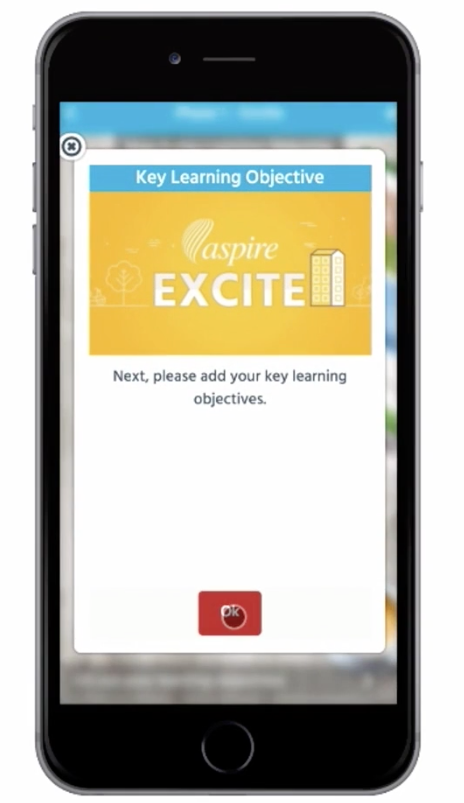 Above you can see a page from a training app we built for management in a large company. Of course, it doesn’t contain a game – but it does have gamification features including rewards and feedback, designed to test preparedness to go on a training course. 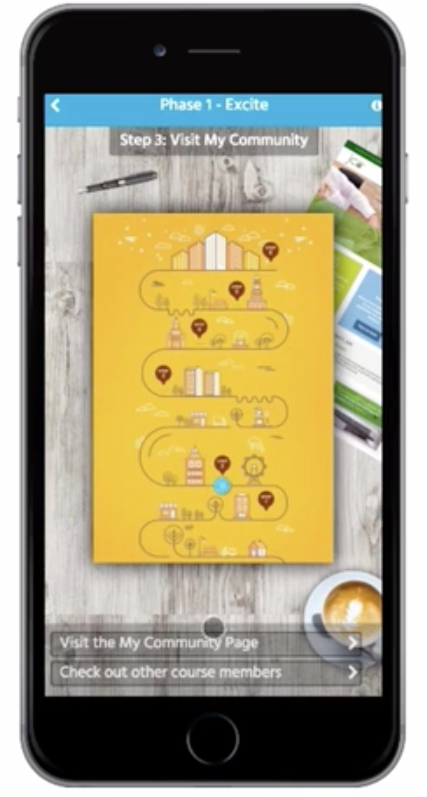 The journey was quite long and convoluted because the training course was quite onerous so we needed to make sure that participants had built up the passion and engagement necessary to complete it. The training course was an Emotional Intelligence course featuring a gigantic, 107-question survey, so we had quite a ramp to get up!

3radical tools like this can be integrated into any website – just a few lines of code are required to embed it: 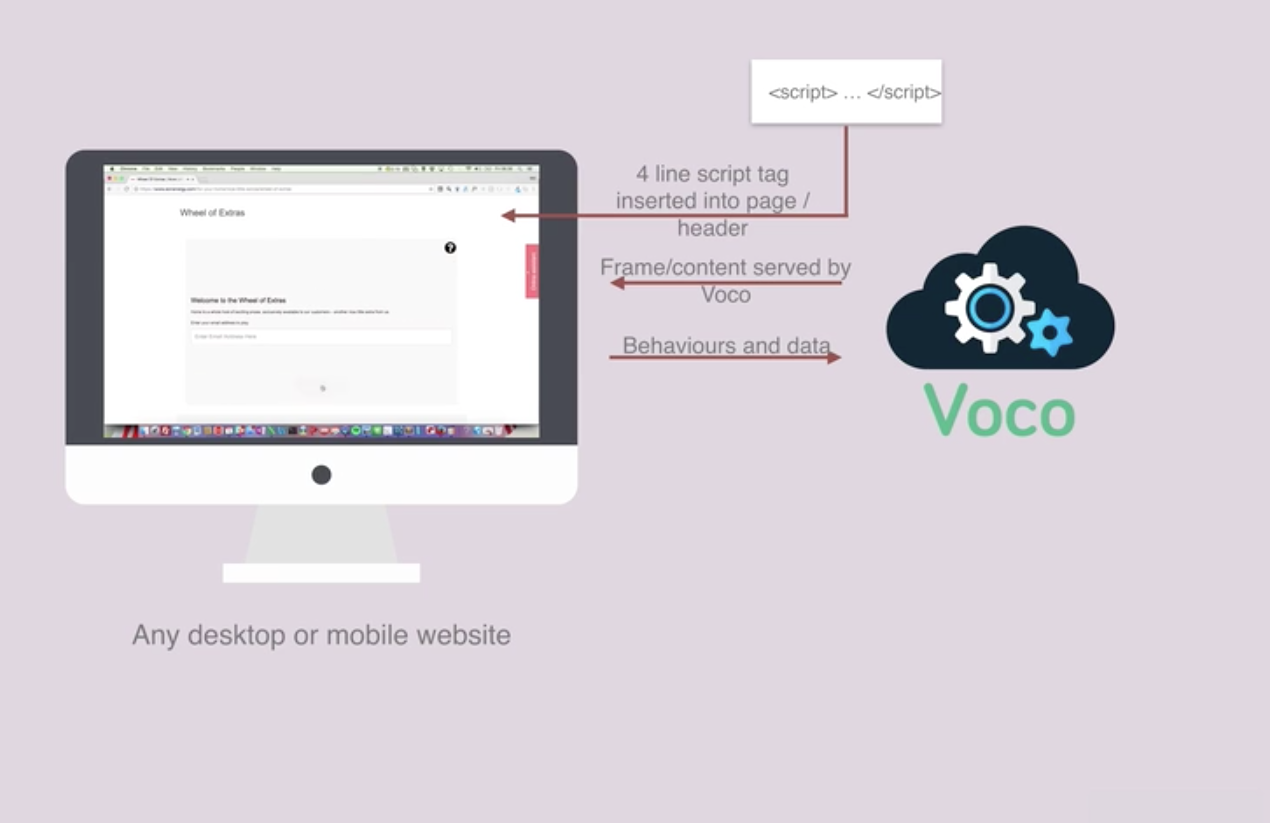 Your user interface lets you build out the structure you want… 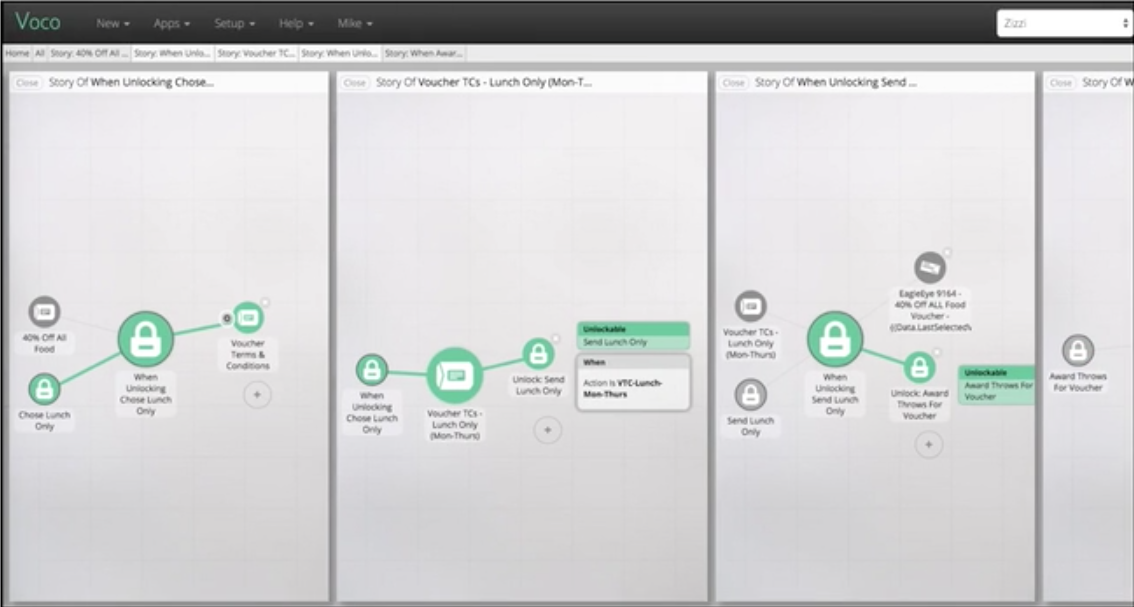 And you can build if-this-then-that systems using cards, while key data is displayed right in the dashboard. 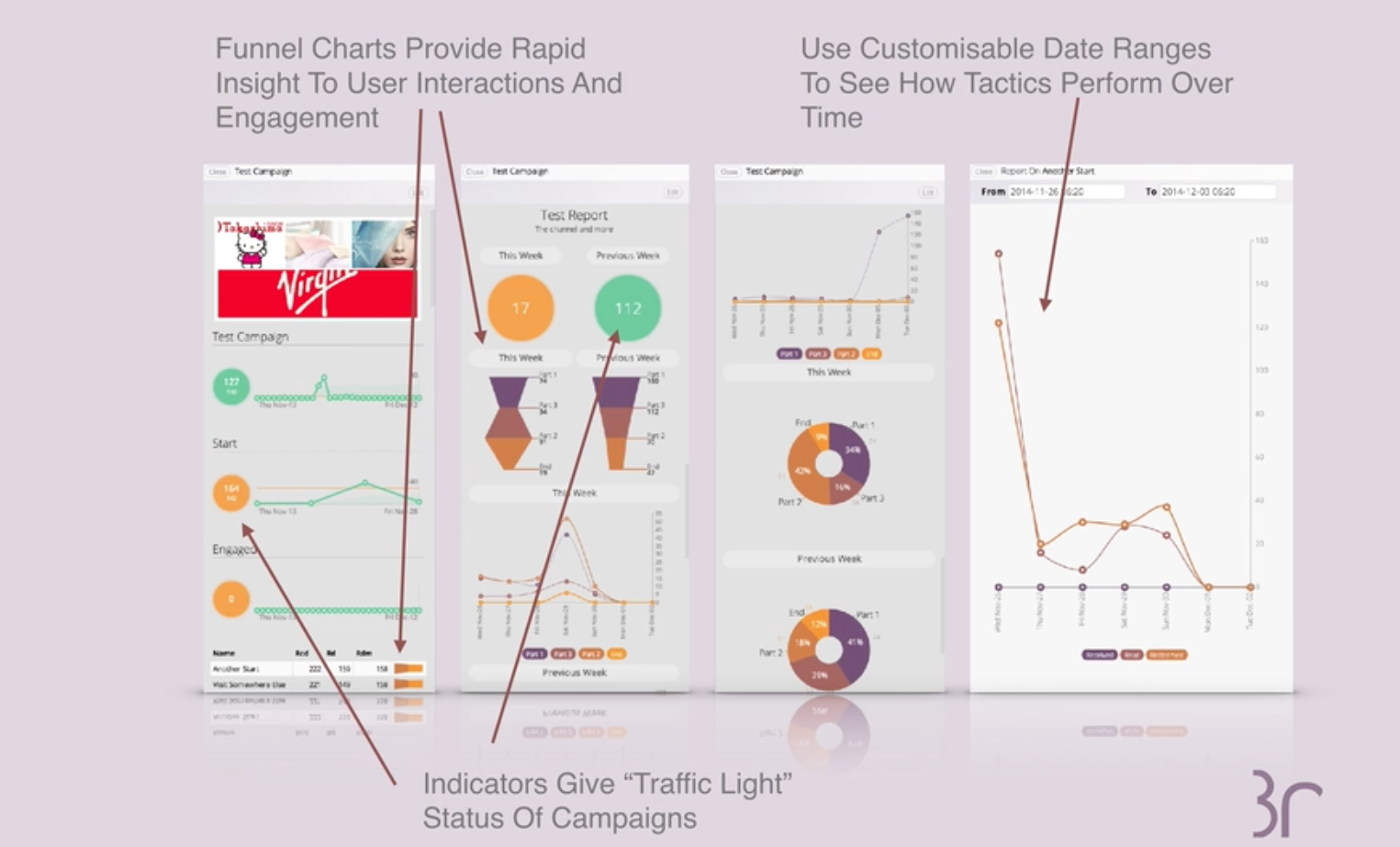 This can then be fed back into your other business systems and used to make better decisions in the future. 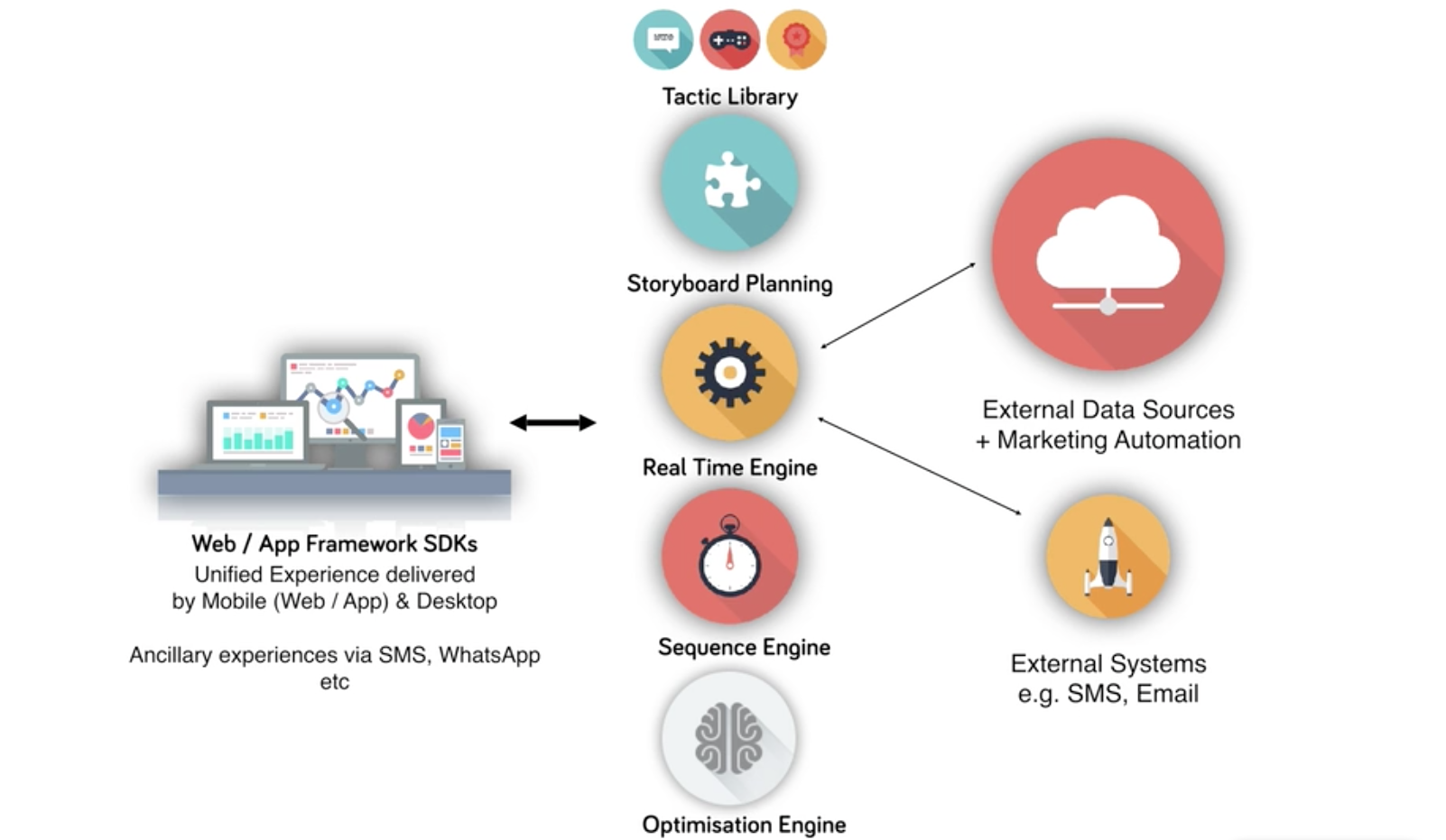 It’s built around the real-time engine in the middle. We have a huge library of things we can already do that you can tweak to suit what you need, storyboard planning to make it simple and intuitive, a campaign engine and AI for optimization and data handling.

So that’s it: if you’d like a more engaged workforce and customers who interact with you voluntarily on Christmas day, get in touch!


CHECK OUT THESE USE CASES